It was a weekend of mixed emotions for the women’s soccer team who were able to beat Fort Wayne on Friday night before losing on Sunday to Oral Roberts in overtime.
It was senior weekend for the mavericks and also the final home games of the season. Omaha’s only seniors Anna Sibson and Ali Engler were honored before the game on Sunday.
The first game of the weekend saw the mavericks hold off a lowly Fort Wayne side that had struggled all year to score goals. The first half saw the Mavericks dominate possession but lack the cutting edge to find a way to score.
Sam Pavlika leads the Summit League in saves this season and was able to take her team into half time with the game still scoreless. The second half got off to a flyer as the Mavericks scored 43 seconds in. Junior Chelsi Rohloff had her shot blocked by Pavlika, but Sibson was able to take the rebound past the goalkeeper and shoot over two defenders for her fourth goal of the season.
The Mavericks had to withstand heavy pressure in the last 10 minutes of the game, but were able to hold on and take home the three points.
Sunday afternoon would prove to be a harder task for Omaha. On only a days rest, the team found it difficult against a 2-8-3 Oral Roberts side that were sitting towards the bottom of the Summit League.
The game was back and forth for the majority of the first half, with both teams getting opportunities to score in a really open game. Rohloff was able to dribble down the middle of the field past a few defenders before finishing past the keeper.
That was the forward’s Summit League leading 10th goal of the season. There were shouts of a penalty for Omaha later in the game as Rohloff was blatantly taken down inside the area, but nothing was given by the referee.
The Golden Eagles evened the score up in the 81st minute through a penalty by Ashley Martin. In double overtime, Oral Roberts would get the game winner through Maria Stordahl, her second of the season.
Head coach Don Klosterman said that Oral Roberts was “the best team his side has played all season” and that player ailments may have had something to do with some poor performances.
The Mavericks will finish their season next weekend with games away at Western Illinois and IUPUI. While they still have a chance at a Summit League title, it’s now out of their hands and they will have to depend on Denver dropping points
The Pioneers have won four in a row and close the regular season out against South Dakota State. 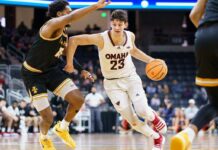 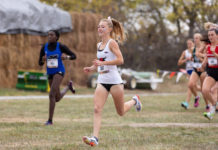