Media voters haven’t had the chance to see the UNO hockey team on the ice in over a week.  But the Mavs’ current four-game win streak must have been enough to solidify their standing in one national poll, and allow them to enter into another.

On Monday when the USCHO.com poll was released UNO had moved up from no. 18 to 15.  The Mavs also entered the USA Today/USA Hockey Magazine Poll for the first time this season at no. 14.

This week is the first time UNO has been ranked in both polls since October 2011.  The last time the Mavs were in both polls was when UNO began last season as no. 14 prior to the Mutual of Omaha Stampede to start the season.

After yet another frustrating weekend against Bemidji State Oct. 26 and 27, the Mavs are unbeaten since.  The Mavs started with a sweep at Michigan Tech the weekend after facing the Beavers, then kept the momentum going with a home sweep of Minnesota-Duluth the weekend after.

In that span UNO has outscored their opponents 16-9.  In that span the power play has jumped from eight percent to 18 percent.

UNO has almost as many goals in the last four games (16), as they scored in the first six games (18).  The Mavs also have a slightly better goals against average (2.25-2.33) in their last four as compared to their first six.

Senior John Faulkner has been in net for all six of UNO’s wins.  Faulkner has posted a 2.03 GAA and a .915 save percentage in those six starts.

All four wins on the current streak have come against conference foes, and have earned UNO a third-place position in the current WCHA conference standings.  With a 4-1-1 conference record, the Mavs trail Minnesota (4-2-2) by a single conference point and Denver (7-1-0) by five points.

Denver is no. 4 in the current USA Today/USA Hockey Magazine Poll and Denver is no. 2.  This weekend UNO will skate at home in a non-conference matchup with Alabama-Huntsville.

After the non-conference series with Huntsville, the Mavs are on the road for two straight WCHA series at Minnesota and at St. Cloud State.  The next time UNO is home is Dec. 14th and 15th against conference foe Minnesota State. 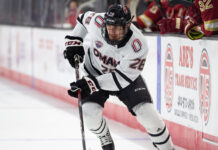