Discover, chart and engage. These three words were the foundation for the 2016 Young Professionals Summit. The YP Summit is a conference in Omaha that allows young professionals to hear from local and national CEOs, entre-preneurs, best selling authors and more.

The summit has been around for 11 years, and every year it challenges the attendees to go beyond the classroom or office, and to enter uncharted areas. The summit is focused on helping young people grow and network through personal, professional and community development.

Josh Linkner is a tech entrepreneur, CEO, New York Times best-selling author and venture capitalist. Linkner was also keynote speaker at the summit. He focused on the five obsessions of innovation: to get curious, crave what’s next, defy tradition, get scrappy and adapt fast.

“As people and as organizations, it is our responsibility to continue to disrupt and to continue to push the boundaries rather than have disruption thrust upon us,” Linkner said.

Linkner started off the seminar by saying all young people need to harness innovation. He said the youth should have fresh approaches to creativity, growth, and transformation, and be able to face any obstacle.

The Summit also featured five people from the Omaha area who have positively changed their lives and the lives of others throughout the community. The first local change maker was Rebecca Stavick.

Stavick is the Executive Director of Do Space. She said Do Space is a free place in Omaha that allows anyone from any background to come in and use new-age technology in creative and innovative ways.

“Do Space is not a building, it’s not technology. It’s a movement,” Stavick said.

The other Omaha entrepreneurs were Matt Tompkins, the Co-Creator of Omaha Live, Josh Dotzler, the CEO of Abide network, Tre Brashear, the Co-founder of Maha Omaha Music Festival, and Shonna Dorsey, the Co-Founder and Managing Director of Interface Web School.

“About six years ago I was waiting tables, and now I am doing this,” Dorsey said.

Dorsey is a University of Nebraska at Omaha graduate. She said she decided to take a risk in a start-up company she helped develop. Her business went from zero to 60-plus applicants in less than two years. Her company is focused on web developer training for anyone wanting to learn something new.

These Omaha people who gave their testimonials at the summit started as normal college students
and defied the limits by taking risks and redefining the standards. Millennials at UNO are learning and growing at a critical time.

The YP Summit ended with speaker Randi Zuckerberg. She is a New York Times bestselling author, the founder and CEO of Zuckerberg Media, host of Dot Complicated and former director of marketing at Facebook.

“There is really no excuse for any of us to ever stop learning,” Zuckerberg said.

She is the sister to former Facebook CEO Mark Zuckerberg. She said young professionals should be cultured from the beginning, even if it’s just a start-up company.

She said to not be fearful of failure, but to instead embrace the future and overcome the odds.
Zuckerberg said a great idea can come from anywhere. 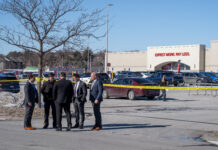